These days retro designs are big business, be it t-shirts, cars, trainers or other stuff, and this trend has expanded into household items including kitchenware and home appliances.

Styles harking back to the 50s and earlier are being emulated in new models of fridge, oven, even toasters. Some designs of early appliance models have been brought back from the dead, and some never even went away!

These are some of the most popular ‘retro-style’ appliances that are gracing households of the 21st century:

The classic radios from the 1930s were so popular that Roberts were even awarded a Royal Warrant as “Radio Manufacturers to Her Majesty Queen Elizabeth II”. They’ve made a massive comeback in the last decade, keeping the original style and with new retro décor by big designers from Paul Smith to Cath Kidston.

Smeg are best known as the king of 50s-style fridges, and have also branched out into dishwashers, washing machines and most other conceivable kitchen appliances. They produced this limited edition matching set in aid of Breakthrough Breast Cancer, for anyone who really, really likes pink. 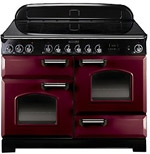 Rangemaster is the world’s oldest cooker manufacturer. Their first range cooker was built in 1830 on the same site as their current factory in Leamington Spa. Today they’re partnered with the company that produce the AGA and this is noticeable in the designs of some of their current models.

Dualit are best known for small kitchen appliances, and their signature style is evident in their matching kettle & toaster sets which come in all kinds of colours.

The founder of Dualit invented the first flip-sided toaster, and to this day the brand retains the instantly recognisable shapes which can be traced back to these first designs in the 1950s. 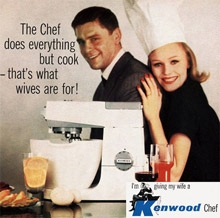 The Kenwood Chef has kept its basic original style since its launch in1950 as “The world’s most versatile kitchen help”. It sold out in Harrods within a week and Kenwood became a household name with the help of wildly inappropriate adverts like this one:

You can see from the photos below that, although technology has progressed in leaps and bounds, the Chef has retained its basic shape and design from the original model to the present day.