Dyson vacuum cleaners are one of today’s most popular and innovative household appliances, but the road to success was certainly not a smooth one for their inventor, James Dyson.

The concept was first developed when Dyson noticed a flaw in the design of bagged vacuum cleaners, which at the time were the only option on the market. The problem was that once a vacuum’s bag became more than ¾ full, the vacuum would start to lose suction, impairing its performance.

In the late 1970s Dyson had the idea of mimicking the centrifugal force of cyclones to create a vacuum cleaner that would not lose suction as it picked up dirt. For the next five years he built over 5000 prototypes in an effort to develop the first cyclonic vacuum cleaner.

Despite what may seem as thousands of “failures”, Dyson persevered with his creation and in 1983 launched the ‘G-Force’ vacuum cleaner. However it was rejected by UK manufacturers who feared that such an invention would disturb the lucrative market in replacement vacuum bags. Again undeterred, Dyson took his product to Japan where it was well received, even winning the 1991 International Design Fair prize.

Dyson hadn’t quite achieved his fairytale ending yet though, as his products still failed to gain interest from the major manufacturers. But again, rather than giving up, he made the decision to establish his own manufacturing company. 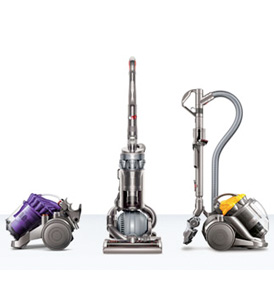 More than 10 years after the idea was conceived, Dyson finally achieved the breakthrough it had been waiting for into the UK market. Today Dyson outsells many of the companies who originally rejected the idea, and has become one of the UK’s most popular brands, with James Dyson being one of the most widely known British inventors.

The story doesn’t end there however; Dyson’s team of engineers are constantly working on ways to improve their products, for example the Dyson Ball vacuum, created in 2005, allowed their vacuums more manoeuvrability by utilising a rolling ball in place of wheels.

In addition to vacuum cleaners, Dyson have also used their patented technology to produce the ‘Airblade’ public hand-dryers which are now popular across the UK, and the ‘Air Multiplier’, a fan which operates without external blades.

Dyson has also founded the James Dyson Foundation, an educational charity which encourages young people to embrace the creative side of engineering. An important part of this is helping people to realise that mistakes or setbacks in the design process are not synonymous with failure, rather an important step which allows you to recognise where your concept can be improved and move closer to success.

Indeed, James Dyson is a beacon for this concept, achieving unprecedented success despite consistent setbacks which to a less determined inventor could have been perceived as reasons to give up their dream.